When I bought my Brompton back in 2016-2017 (to be really honest, I can't remember what year it was, but Brompton geeks will would know as it's the year they moved the gear levers from pointing out the top, to hanging out the bottom), I decided to treat myself (well, parts of myself) to a Brooks saddle (a black B17 for saddle geeks - on the Internet there's an XYZ geek for any value of XYZ).

These traditional leather saddles have a reputation for lasting a lifetime and also being incredibly comfortable after an initial "breaking in" phase. Being made from a natural material, these saddles need looking after which entails treating them with a waterproofing substance (Brooks call their treatment "Proofide") and if the leather becomes a little sagged, tightening a bolt at the front of the saddle a little to take up the slack. I'd been carefully attending to the needs of the saddle for the past 3-4 years, although I think I've only had to turn the bolt a little twice since I got it.

Fast forward to a couple of months ago. I was riding the Brompton, and I noticed that it was beginning to make some strange creaking noises. Now, the Brompton to me is very much a utility vehicle, and the occasional rattle or creak is acceptable, but this noise was ever present when cycling, most noticable when peddling or going over the not so smooth roads in Essex.  My initial suspicion was there was something wrong with the suspension block at the back, but after much examination and adjustment, this was ruled out. As was loose spokes in the back wheel that had been recently rebuilt after the rim had worn out.

Turns out that the part of the Brompton making all of the noise was the Brooks saddle. The leather had sagged a little since I last checked, but not by a huge amount. Thinking that this is just a case of tightening up the bolt a little, I got the appropriate spanner and went to work. What I saw was quite unexpected. The bolt at the front of the saddle had snapped! I'd be the first to admit that I'm probably not the lightest of riders, but certainly not the biggest, and for a steel bolt to break was certainly a surprise. After much muttering of profanities at having broken the saddle "that'll last you a lifetime" (as I'd been told by many), I decided that I have to get a replacement. No great rush as the old saddle was still ridable, it just complained with every movement I made on it.

Off I go to the Internet to get a new saddle.

I would normally have gone down to my local bike shop where I get looked after very well, but since they've been taken over by Sports Direct, things have changed, and they've not been able to get much stock in - so the choice is very limited. There's possibly a rant about bike shops coming up in the near future, once I've distilled the rants and profanities into something close to legible English.

The default would have been to get the same saddle again - it had served me well, and indeed, I went to the Brooks website with the full intention of ordering another leather saddle. I was then intrigued by another type of saddle that Brooks make - the "Cambium". Over the next couple of days, trawling the Internet for reviews, it seems that this "new" (since around 2014 it turns out) type of saddle from Brooks is almost universally loved, with mostly positive reviews from trustworthy sources.

Brooks seems to make a big thing about being English - they have "Brooks England 1866" all over their website, and their website even uses the brooksengland.com domain... which caused me much confusion then I got a shipping notice that my new saddle had been dispatch from Venice.

A quick check of Google Maps and O-Level geography memories confirmed my suspicion that Venice is a reasonable distance from the Brooks factory in Smethwick... so far infact that even Ryan Air would, if there was an airport in Smethwick, not have the cheek to refer to it as "Smethwick Venice International" - yes, really far. 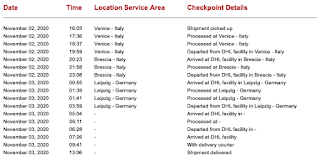 A little research later and I'm more informed - Brooks itself has had a checkered past, being owned by Raleigh in the 1960s, went bust when Raleigh also did in 1999, before being resurrected and then sold to Selle Royal - an Italian company... and that is why my "Brooks England" saddle was travelling from Italy. By the time the new saddle arrived in Essex it had travelled across northern Italy, to Germany, and finally into the UK.

My new saddle had done more travelling in 2 days than most people have done this year!

Today the new Brooks Cambium C19 Carved is sitting proudly on the Brompton, and after taking a few short rides out I think it was a good investment. The creaking noises have been banished to a distant memory and the Brompton is running almost silent. The saddle itself is slightly firmer then the old leather one, but it's comfortable and I think I'll get used to it.

We're not quite done yet though. I'm now staring at the broken old saddle.

Brooks offer an out of warranty repair service which I thought I'd investigate.

As an aside, they offer a 10 year guarantee on their leather saddles if you register your saddle within 3 months of purchase - something I just found out!

Being quite happy with my new saddle I don't really need the old saddle, but it's a shame to just throw it away if it can be economically repaired. Off goes a photo of the broken saddle to Brooks through their website. 8 days later I get an email back indicating that yes indeed they can fix my saddle, it'd be £40, and by the way, we don't take credit cards, you should pay your money into this account and send us the saddle.

Now I’m left pondering whether I should go ahead. £40 is a reasonable sum to pay for a repair to something that I have no immediate need for.

I'll sleep on it for a while.

Oh, and Smethwick is the Venice of the West Midlands - it also has canals!