2015, I was in my mid forties and having sat behind a desk most of my life writing software, I got out and trekked to Everest Base Camp. This was hard for a relatively unfit bloke with short legs, but gave me a taste for the outdoors and seeing the world very slowly.

Within a month of coming back from Nepal my father passed away suddenly.

So I did what anybody would do in such a situation, I bought a folding bike with small wheels!  OK, so maybe not everybody.

Since then, my little Brompton bike has gone to most places with me. It's been on business trips to The Netherlands, commuting in London, and even as far afield as the frozen aisle in my local Sainsbury's to do a shop. 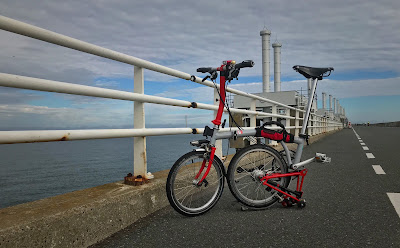 September 2020 saw the Brompton and me go up to Scotland for a week. This was the first time I'd really gone away with just the bike for a whole week. Being inexperienced, over-ambitious, and a little stupid, I packed far too much. 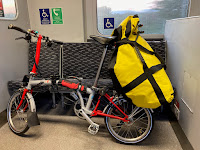 It's not as if I was camping - I was staying in quite a nice apartment that was fully equipped. Long story short, the 40 mile cycle from Edinburgh to Auchteradar was a bit of a challenge. Definitely a day full of type-2 fun. (see Types of Fun)

So now, it's almost November 2020, the slight mental scaring from the trip to Scotland having mostly healed, I'm thinking about what to do next. I quite fancy a long distance trip but can't spare the amount of time it'd take to do the Land's End to John o'Groats route (at my speed it'd probably take 3-4 weeks)...

My current thinking is to go from Land's End to Ness Point, the most westerly and easterly extremes in mainland England. The route will be about 500 miles, something that is probably very achievable in 2 weeks, and do it during June in 2021 when there's maximum daylight.

On this blog I'll post details about the planning for the trip, various decisions (crazy and otherwise) that I'm making, as well as the route that I'll be planning to take and no doubt deviating from along the way.

Hopefully by posting all of the details I'll maybe encourage or inspire others to get out on their bikes, of whatever wheel size, and enjoy the outdoors.