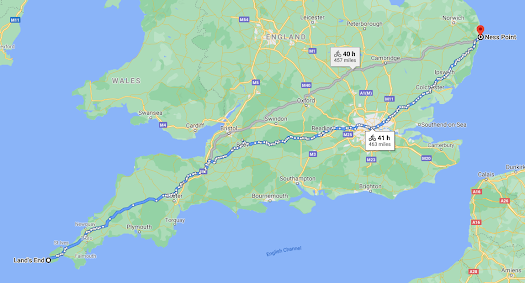 Looking at the full trip, Google Maps suggests that the route end-to-end is about 460 miles, but it looks like a lot of that is on major roads, and avoiding the really nice bits of the country.

So, thinking about starting the trip with a big day, taking in what looks like some very nice bits of Cornwall that I haven't been through before. 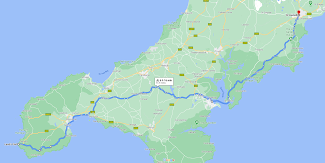 After making my way down to Land's End by train to Penzance, I'll spend the night somewhere near Land's End itself so there's not too much back-tracking in the morning.
On the first morning proper, after leaving Land's End, head immediately away from the A30 and then take some small roads to Penzance for a bit of breakfast.
After breakfast, head off through the heart of Cornwall towards Falmouth. Think I'll have a spot of lunch there and then get the ferry across to St. Mawes.
The last leg of the day is then off up to St. Austell, probably stopping off at The Lost Gardens of Heligan for an afternoon tea - had a great one there in 2019.
Staying somewhere in or around St. Austell at the end of day 1.
Think that's a good rough plan for the first day - I'll look into the exact route in more detail closer to the time when I get around to programming my GPS - but that's a post for another day.